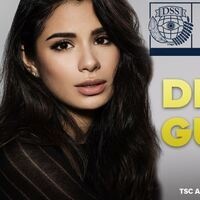 The Distinguished Speaker Series (DSS) is a signature program under the leadership of Student Activities, that aims to provide the university and surrounding community with world-class speakers and lecturers. DSS hosts public events with priority seating for UTRGV students, faculty, and staff.

Diane Guerrero is a Boston native and has, from an early age, had an affinity for the arts. She attended the Boston Arts Academy where she studied vocal music. As a teenager, Guerrero suffered through a forced separation from her family as she watched her loved ones be deported. She shares the incredible story of how she was able to remain in the US, continue her education and build a successful career. After the departure of her family, Guerrero never lost focus and continued to work hard to build a better life for herself. She graduated from a U.S. high school to then she received a degree in political science and communication. However, she quickly realized her passion lay in performance art, at which point she moved to New York to pursue her dreams.

Guerrero has subsequently appeared on numerous television series and is best known for her roles as “Maritza Ramos” on the award-winning, Emmy- and Golden Globe-nominated Netflix series Orange is the New Black (for which she received two Screen Actors Guild awards) and as "Lina" in CW's break-out hit, Jane the Virgin.

Guerrero can be seen in the upcoming feature film The Godmother, opposite Catherine Zeta Jones, Olivier Martinez, John Leguizamo, and produced by Nicholas Pileggi. She can also be seen in lead roles in Peter and John, Happy Yummy Chicken, and has appeared in several other features including Lionsgate’s My Man is a Loser.

In 2015, Guerrero was named a White House Ambassador for Citizenship and Naturalization. She is an outspoken advocate for commonsense, comprehensive immigration reform and has worked with Immigrant Legal Resource Center and Mi Familia Vota, a nonpartisan Latino civic engagement organization to promote citizenship and voter registration. Variety named her one of the top 10 Latina actresses to watch. Her memoir from Henry Holt publishing, titled In the Country We Love, was released in Spring 2016.

Free and open to the public.