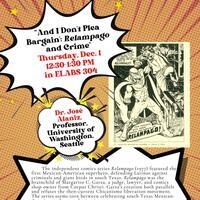 "'And I Don't Plea Bargain': Relampago and Crime"

The independent comics series Relampago (1977) featured the first Mexican-American superhero, defending Latinos against criminals and giant birds in south Texas. Relampago was the brainchild of Margarito C. Garza, a judge, lawyer, and comics shop owner from Corpus Christi. Garza’s creation both parallels and refutes the then-current Chicanismo liberation movement. The series seems torn between celebrating south Texas Mexican-American culture and rejecting some aspects. How did Margarito Garza’s nationalist “law and order” message (not uncommon in superhero narratives of the era) clash with the message of much Chicano rights rhetoric? This talk examines the Relampago series for the paradoxes that erupt when superheroics fuse with ethnic liberation.

About the Guest Speaker: José Alaniz, professor in the Department of Slavic Languages and Literatures and affiliate with the Department of Cinema and Media Studies at the University of Washington, Seattle, has published three monographs, Komiks: Comic Art in Russia (University Press of Mississippi, 2010); Death, Disability and the Superhero: The Silver Age and Beyond (UPM, 2014); and Resurrection: Comics in Post-Soviet Russia (OSU Press, 2022). He has also co-edited two essay collections, Comics of the New Europe: Reflections and Intersections (with Martha Kuhlman, Leuven University Press, 2020) and Uncanny Bodies: Disability and Superhero Comics (with Scott T. Smith, Penn State University Press, 2019). He formerly chaired the Executive Committee of the International Comic Arts Forum (ICAF) and was a founding board member of the Comics Studies Society. In 2020, he published his first comics collection, The Phantom Zone and Other Stories (Amatl Comix). His current book projects include Comics of the Anthropocene: Graphic Narrative at the End of Nature.

This event is hosted by the UTRGV Dept. of Literatures & Cultural Studies. Call 665-3421 for information.