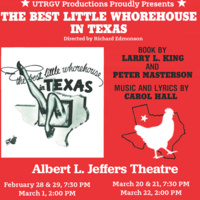 Based on actual events, the romping musical The Best Little Whorehouse in Texas recounts the good times and the demise of the Chicken Ranch, a well-known pleasure palace in Central Texas. Since the 1850s, the Chicken Ranch was known for regularly hosting college sports teams, mayors, senators, and governors. That all changes when sanctimonious journalist Melvin P. Thorpe exposes the house of ill repute and rallies support to shut it down.

*Adult themes and language. 10 years and younger will not be admitted.*

For special accommodations or more information, contact the Theatre Box Office at 956-665-3581 or theatreboxoffice@utrgv.edu.

You're not going yet!